The "Asian" model of economic development is to subsidize exports, prevent imports and maximize your foreign exchange earnings. I call it modern mercantilism.  If a country runs up a huge export surplus then those earnings have to be recirculated to balance their account so the country then buys a debtor country's debt or equities or even their sub-prime loans.  If you depended on the US consumer to buy all your exports then you just hit a wall.  The biggest exporters of capital are now in big trouble. And they are… 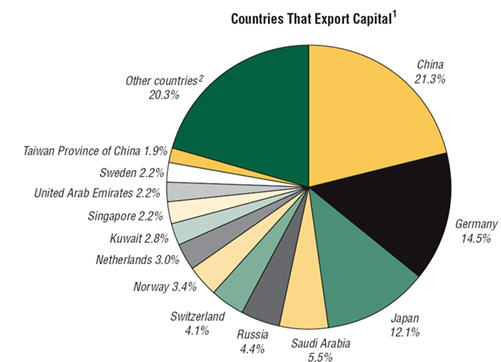 and the winners will be… 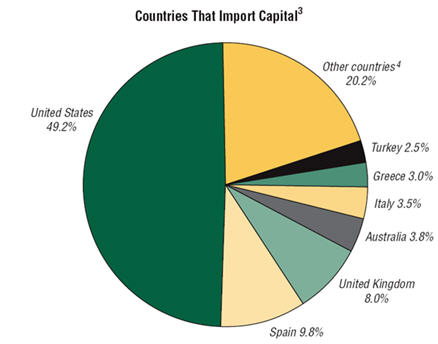 A lot of analysts, authors, and regulators are trying to assign blame for all our economic woes.  They look at all the corruption in the mortgage business and the leverage on Wall St.  But it really all comes down to one thing – price.  The free price of debt made it irresistible to everyone.  Who do we blame for that .. one man :

And there was a second (virtual) freebie.  The price of new imports from China (Asia in general).  When goods are produced by workers who earn $3 a month, flat screen TV's suddenly get awfully cheap from the perspective of a first world earner.  It especially helps if those 3rd world countries manage to block their own purchases of anything we sell.  Who do we blame for this?  One man :

-who sprinkled MFN status on every country in the world in 1994 like it was pixie dust.

A TV news host is supposed to ask a question and if it is not answered he is expected to ask it again and again until it is answered.  That is his only job.
I never want to hear his opinion or forecast or analysis of anything.  He is a conduit – a medium, through which I am supposed to get "expert" opinion.  When a news shows interviews another news host they are wasting my time.
In fact I think every time any expert is interviewed a list of his historical predictions should be put up on a split screen (with the help of say factcheck). If he has no record or is always wrong he should not be allowed on camera until he gets something big right.

Yesterday, markets collapsed as China failed to deliver on it's temporary idea of initiating a second stimulus plan.  Why does anyone think that a stimulus plan by China would help any economy other than China's?
Can China switch from being a mercantilist economy – totally dependent on exports, to one that consumes what it makes and maybe a even a little of what other countries make?
Highly unlikely.

The front page of the NY Times shows Mahmoud Karzai (Hamid's brother) planning a new apartment complex in Kabul.  He has been busy getting sweetheart deals in banking, cement, real estate, coal mines, and car dealerships.  He proclaims: “I’m in love with the idea that Afghanistan can become a Singapore, a Hong Kong.”
Has he been watching what's going on over there lately?  It's easy to show him.  All he has to do is turn to page A8 which explains the economic crisis going on there.  The statistic of the day:

"Singapore, where the population is just 4.6 million compared with
Taiwan’s 23 million, is particularly vulnerable to a decline in trade.
It typically imports unfinished products, does some processing of the
goods and then exports them, so the total dollar value of its exports
and imports is far larger than its gross domestic product — about three
and a half times as much, in fact."

That is staggering …the world is full of drug addicts addicted to US consumption.

So you say – we have entered a global recession, maybe even a
depression; surely the Chinese trade surplus will wither as western
import demand shrivels up.  The first report is in.  We have a new
record!  In October the surplus reached $35.2 bn..  In fact export
growth did weaken from a rate of 21.5% year over year to 19.1% but
incredibly, import growth collapsed from a rate of 21.3% to 12.4%.

Specifically the trade surplus with the US rose 13.3% year over year.  It is easy to
argue that Chinese goods that feed through say Walmart into the US can
not be replaced by US production and in fact are necessities that will
be bought even if the economy tanks.  I find neither one of these
arguments to be very compelling but the swing factor here is NOT our
imports which are down a little and acting as they should.  I would
expect to see further declines here as the economy falls further.  The
real story is (US) exports.

The published growth rate of the Chinese
economy has declined from 10.1% to 9%.  How does such a small decline
in the rate of GDP growth drive such a massive instant drop in
imports.  There are precious few explanations of this in the press
beyond the countless anecdotes about their economic malaise.  Could
their economy be so addicted to exports that any decline in exports
triggers a collapse in domestic demand?  If that’s true then the GDP
figures are being produced in a Chinese Disneyland.

Bob Herbert, the liberal editorial writer from the NY Times called for a shrinking of the defense budget and a reduction of the extension of American military power given our appalling economic circumstances. (Go HERE) We simply can't afford the same size commitment to the military.
The other famous exponent of a shrunken military is Ron Paul who has said repeatedly that we cannot afford countless foreign military bases.  The political spectrum has come full circle on this issue.
Are there any plans to shrink the defense budget?

Not that I see.

A hot topic is the recent changes made to the tax code by the new Obama administration.  The tax rate on the top 2% is going up and their deductions are going down.  The tax rates on the rest of the population will decline.  This is a relative redistribution of the tax burden (this does not redistribute wealth since this is not a wealth tax).  Is that fair?
When we open up our borders to trade with 3rd world countries then indirectly our labor begins to compete with their labor.  The resulting exporting of jobs forces our union system to cower and the leverage that workers have to ask for raises, collapses.  This is called factor price equalization and while it drives down incomes for most Americans, it improves the returns on management who can now oversee more productive processes where their companies' ROE inexorably rises.  We see this in all the fake productivity numbers that are generated when we make parts offshore and then complete the assembly here – with fewer US workers.  Miraculously our productivity improves.
So moving jobs offshore drives a wedge between the different strata of our labor pool and it is logical to tax the beneficiaries at a higher rate and the victims at a lower one.

The US trade deficit with China has been exploding since President Clinton granted them MFN status in 1994.  A first world country will never profitably trade with a third world country where there is no minimum wage, no pollution controls, no patent or copyright law, and (especially) no floating currency.  What we get are unbelievably cheap imports which relative to our first world salaries are irresistible  Our trade account goes into massive deficit, our savings rate collapses and consequently our investment rate collapses with it. 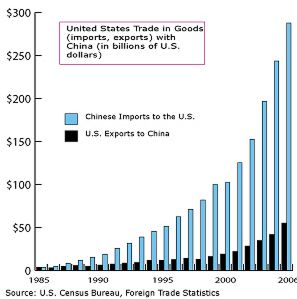 Everyone understands that in the long run an economy without investment will die.   We have now become dependent on China to fund our profligacy and our economy has become distorted toward non-tradeable goods.  We are now an economy of lawyers, brokers, and plumbers.  As Kevin Phillips has said -" the only thing we have become good at producing is debt."

This site is devoted to finding solutions to America’s problems and commenting on public issues. Partisan noise is ignored or mocked. Let’s create our own post-partisan reality where reason wins.